P and I are arguing, well in point of fact, we both maintain that we are not arguing but that the other is. We are extremely grumpy. The baby has a fever and is awake constantly throughout the night and A has a hacking cough that wakes her up. For the last couple of nights she’s slept in with us. Her coughing wakes the baby when I’ve just got him detached from my boob and back into his cot and likewise his crying wakes her up in between coughing fits. Last night at about 5.30 I finally remove the baby from the bedroom and stumble next door into A’s bedroom so as to stop him waking everyone else. He cries but I force him into a huddle and pat him gently til he stops and gives in to another hour of sleep. I drift off  my legs bent up and cramped against the end of my daughters minibed, and I wake up amazingly refreshed! As long as you get to sleep at the end of the night for an hour or so your body tricks you into thinking you’ve had a nights sleep! What a revelation. Worse are the nights when the kids keep you up from 4 and that’s it. Don’t be fooled, no amount of love for your children can override the sleep deprivation and keep you patient and calm on those mornings. We are all bad parents.

Before I had children someone once asked me to predict what would be the biggest challenges about being a parent. I said

“Allowing my children to be themselves”

Little did I realise that the answer was a lot simpler. The biggest challenge is coping without sleep.

In our house sleep has become like a form of currency between P and I.  We have invented a system. I get up on the school mornings,  and P gets up on the other mornings. On our morning to get up we both bark and complain looking at the clock. It has never been said in so many words but I’m sure we both have the same thoughts when the kids are wide awake and the clock has just ticked past 6,  we secretly direct rage at the other who we are sure had the luck of it being closer to 7 the day before when it was their turn. Today was Saturday and the morning waker was P. When I got up after an amazing lie-in at 8.30 he went back to bed. The baby was also having his first nap of the day and rudely woke up crying so that P was again roused from his sleep. I eventually took the baby downstairs and P continued sleeping til lunchtime. The weekends tend to be basically just a rota of who gets to be asleep. So from 8.30 until almost 12 I am letting him sleep the morning away while I try to keep A busy with the lego with a feverish snotty baby clamped to my leg.

At around 11 I am having a mental conversation with myself,

shall I send the kids in to wake him up?

God I’m so annoyed with him

No I’ll let him sleep, he’ll be so happy and amazed at how long he’s slept, and then we’ll all have a pleasant day being calm and rational with each other

No but this is torture, how dare he still be in bed, I’m sure I never get to do this

Don’t persecute yourself, just go and bloody get him up! It’s about time he came and helped with the weekend

I’ve toed and froed about it all morning and now it’s practically lunch time, so just to show everyone how heroic and good at coping I am I’ve wiped the snot off my legs, plonked the baby in the high chair to stop him climbing up my pyjamas and into the oven and I’ve started making the cheese on toast when P finally comes downstairs.

I’m trying to look all unflustered and cool but I am perplexed when I notice that he still looks grumpy!

Ok so now I think I’m going to punch him in the head, all illusions of a pleasant weekend family day are shattered.

What a luxury it would be to over-worry about “allowing my children to be themselves” and to make mistakes, blah blah, this all sounds like a lot of touchy feely babble. I’ve got a whole ton of books on parenting sitting on my book shelves unopened. My eye suddenly scans over the debris of ketchup, juice and scattered paperwork on the table and rests on a book lying horizontally on top of the shelf. 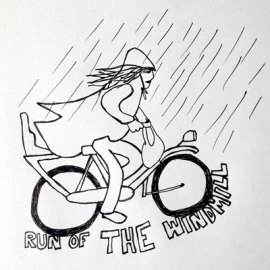 Other articles by Ellen